We caught up with Dublin-based, Italian producer, Lerosa to chat about his studio, gear, and creative process. He’s also kindly supplied us with a quality 90’s-focused techno mix.

Leopoldo Rosa, known under his music alias as Lerosa, is a Dublin – based Italian producer and DJ. A 13-year journey has led him to create fantastic releases on Ostgut Ton, Idle Hands, D1, Slow Motion, Uzuri and more. Although Lerosa primarily focused on electro when he began producing, he later moved to extend his musical reach to embrace abstract techno and leftfield house productions. This departure in genre coupled with the release of his first two full-length LPs, ‘Amanatto’ and ‘Bucket of Eggs’, has led Lerosa to gain a watchful eye in the underground electronic scene. Be sure to check out his most recent EP, ‘Authority’, on the Lunar Disko label.

Lerosa’s approach to his studio life has always been one that is relaxed and intuitive. His songs stem from live jams and he often aims to capture the core essence of a song on the first go. He combines a variety of analog gear like the Dreadbox Abyss and the Cyclone TT606 to create an expansive musical atmosphere while also capturing the best of both worlds with digital tools like Ipad applications and classic VSTs like the FM-4.
We did a deep dive into Lerosa’s studio to learn about everything from his recording processes, dream synths, thoughts on Eurorack, favourite drum machines and more.

Lerosa was also kind enough to record a killer all vinyl 90’s house mix. It is a tribute to what was coming out of Mark Broom’s “Pure Plastic” label and studio in the early ’90s alongside work from contemporaries like Stasis (Steve Pickton), Baby Ford, Dave Hill, Ed Handley (of Plaid fame).

Can you give us a brief overview of your studio flow? How do you record and finalize tracks?

I record jams with synths and drum machines, each instrument is recorded into the computer and routed out to an analog desk for EQ and external effects. I then play around with these main stems, edit them or maybe add an overdub and then record everything through the desk as a regular stereo track in real-time playing with the desk faders, sends and so on. Normally I try to fuss as little as possible and try to capture most of everything right on the first take. I leave all the mastering stuff to the engineers who have the ears and the gear to do that job.

How has your studio evolved over the years? Have you gone more analog? Digital? What drove this change?

I started out on hardware with only the desk being analog, everything else was digital (Yamaha Rm1x) or virtual analog (Nord Lead 2), this is around the early 2000’s so the analog synths renaissance was still a bit away. I was happy jamming away like this into minidisks for a long time until I started dicking around with Ableton Live mostly as a sampler and eventually making it my main sequencer and audio recorder but still using hardware synths. At some point, I switched back to hardware sequencing, first my trusty Rm1X and then its bigger brother RS7000. So I’m back to hardware sequencers, this time using all these new analog synths and drum machines we’ve been lucky to get these days. I do use iPads a bit for looping and the odd synth sound. 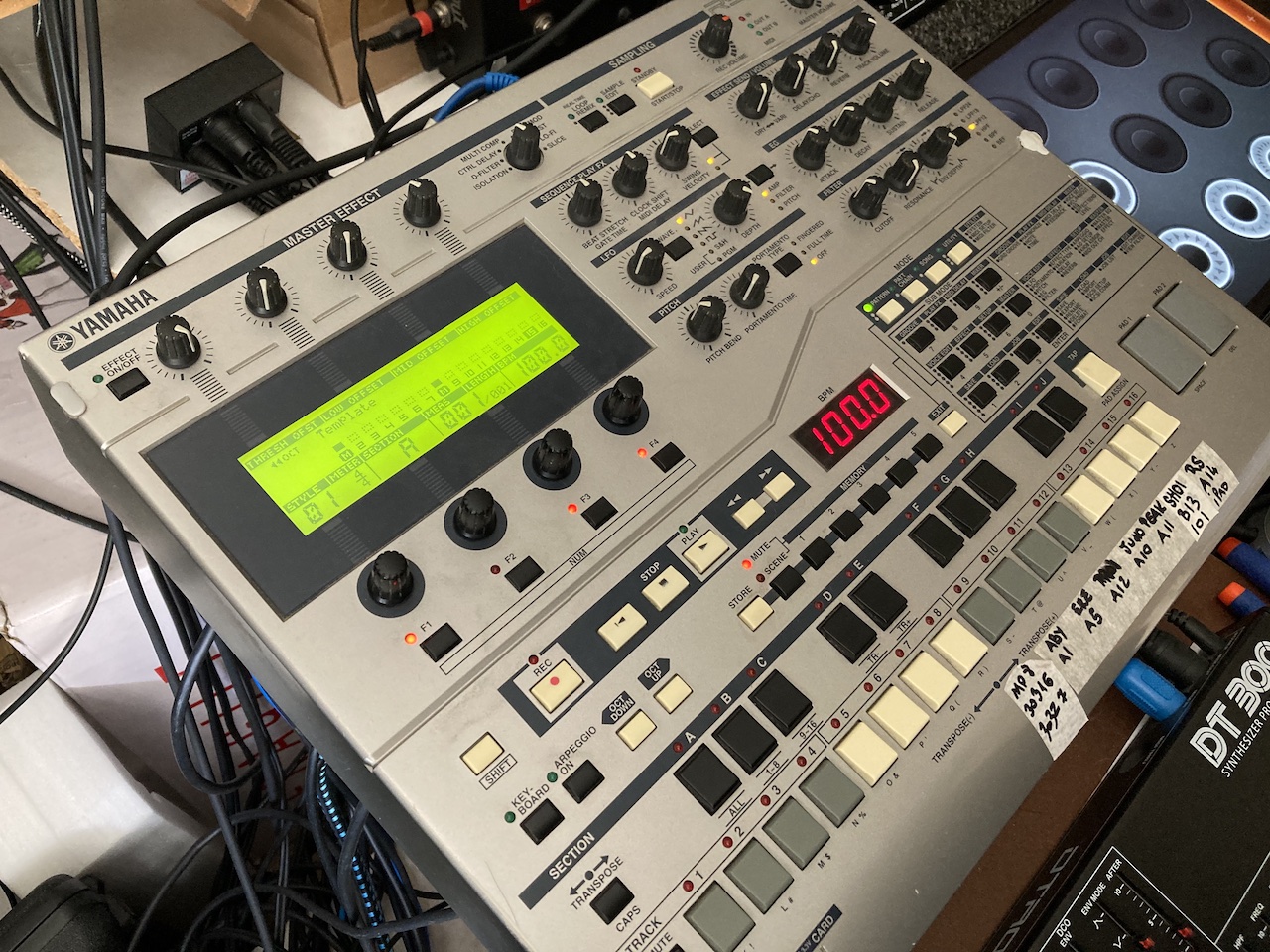 If you could keep only one piece of analogue gear which would you choose?

I think the Dreadbox Abyss would be my pick, it’s analog, rich-sounding, super easy to program and has built-in analog effects that behave like guitar pedals, it’s rough around the edges but sounds like nothing else. 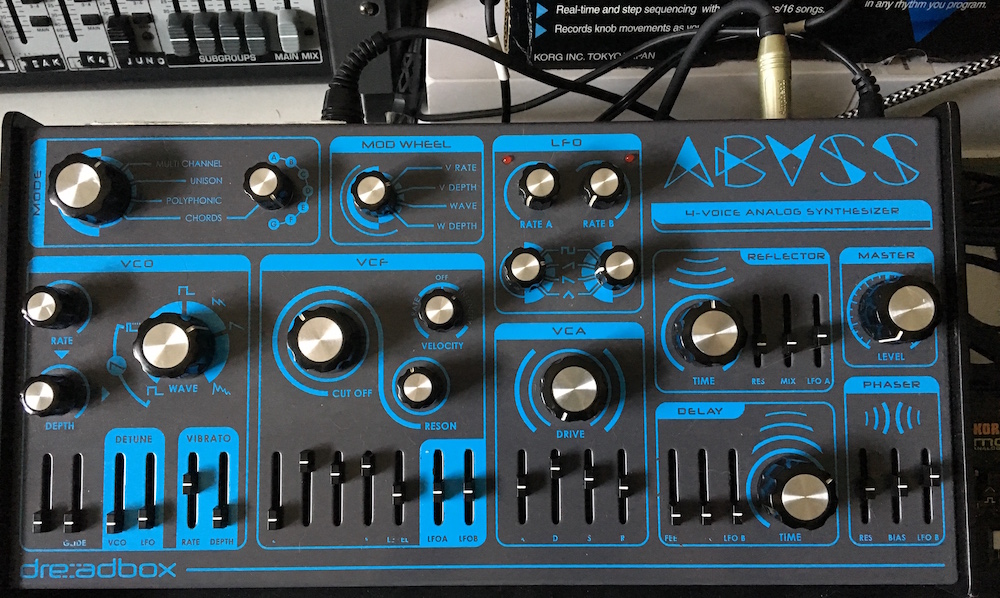 What is your dream synth?

I think a digital synth actually, something like a JV2080 or a Kawai K4 with all parameters available as knobs and faders, so basically very large, maybe with analog filters. Something like a Roland JD800 but remade today, without the failing electronics of 30 years old kit, I really don’t care for vintage, I like new synths.

What are some essential effects you use?

I’m a sucker for spring reverb on drums, Lee Perry style, and I like chaining phasers into delays for that 70’s space thing on synth leads. Also a good Vermona Filter Lancet to overdrive drums. 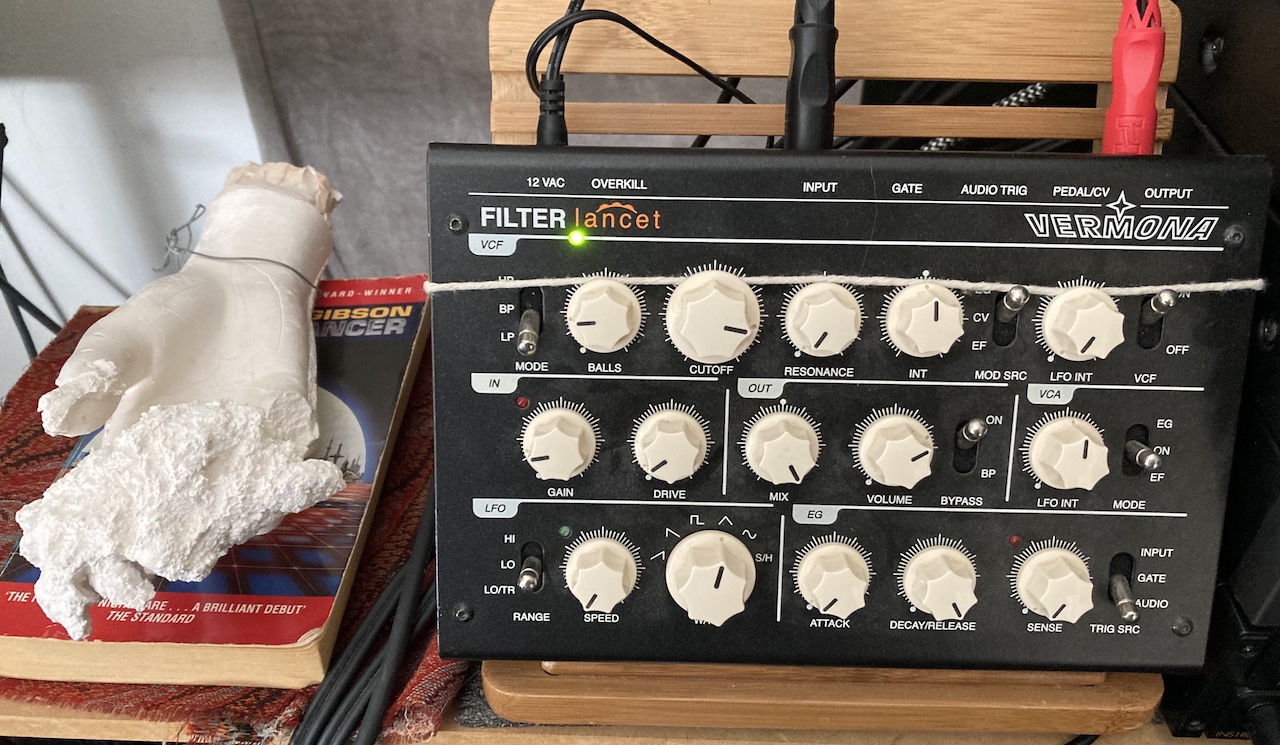 What is your favourite percussion machine?

I really like the Cyclone Analogic TT606, an analog 606 clone, it sounds great, easy to program and tweak on the fly. The sequencer is very flexible and fun to use. 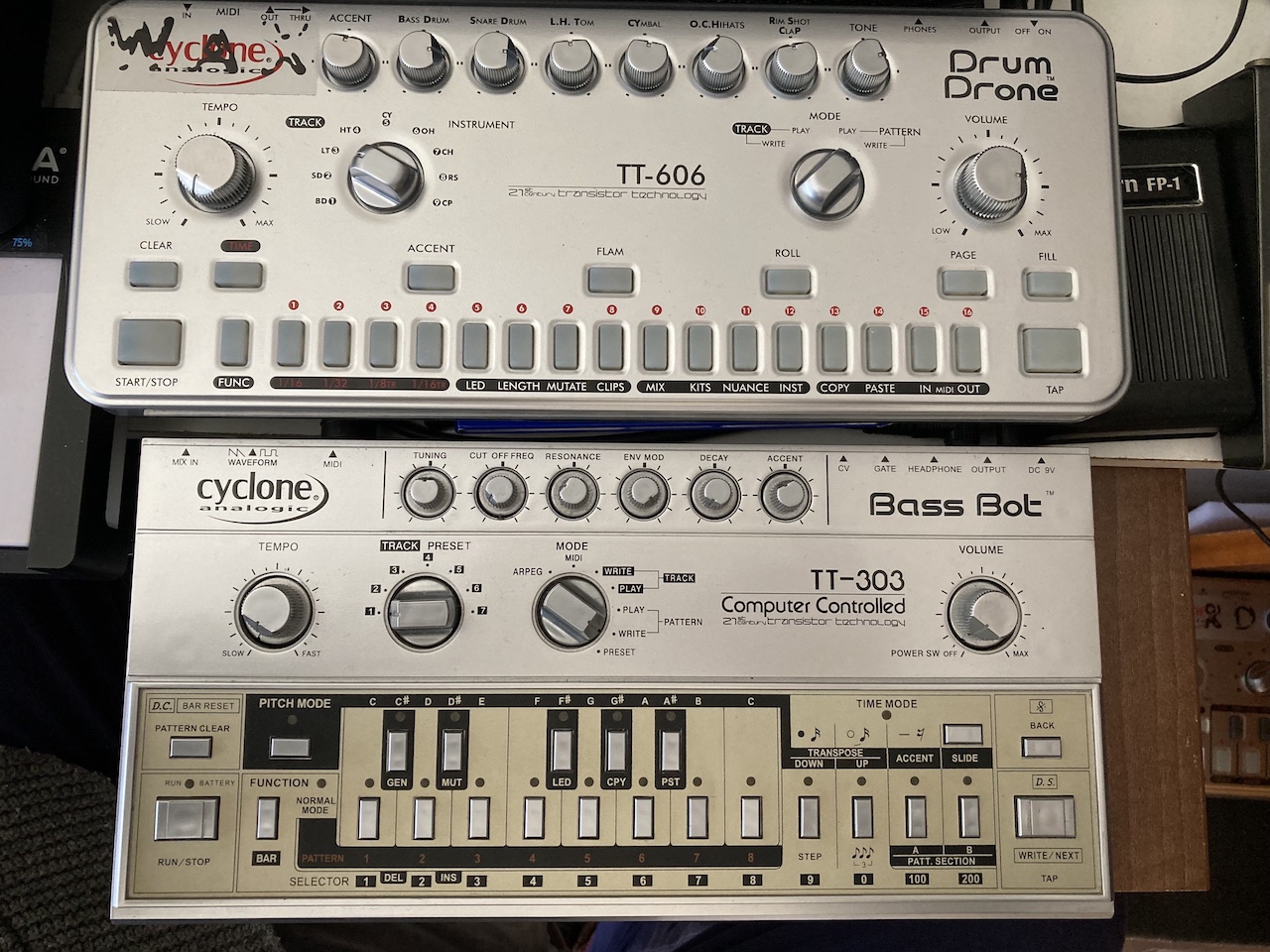 Do you use any software in your production process? Are there any VSTs, apps or plugins that you particularly like?

On the computer I only use Ableton and mostly just to route and record audio, mostly using the built-in limiters, I’m not a fan of computers I do however use a fair amount of iPad music apps. Something like Loopy HD to create layers of looping audio, like a guitar looper but with 12 loops if you want. Also, I use Korg Gadget mostly for live sets but sometimes I like to use the drum apps in it or some of its PCMs style synths. Also, an FM synth called FM-4, like a Yamaha TX81z but with all control visible and accessible. 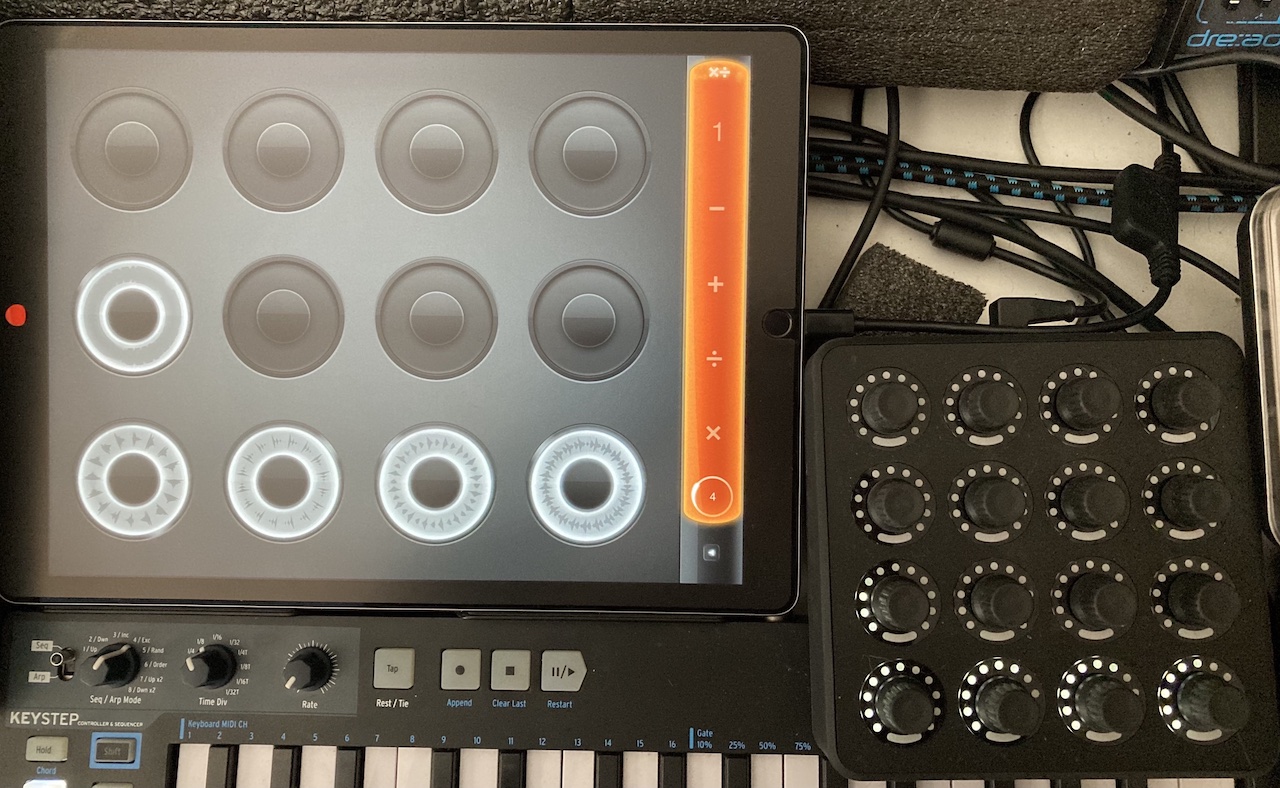 How do you handle latency with so much stuff connected?

I use the Midi clock from the Yamaha RS7000 to run everything, I guess the computer introduces its latency bit since everything goes through the computer first then it is sort of evenly applied and it doesn’t bother me. I only notice if I try to overdub a percussion instrument or something like an electric bass, then the recording will be off but in Ableton, you can pull the timing a bit to compensate for that.

What do you find more important: Investing in audio quality or sound sources?

Sounds sources, basic recording quality nowadays is CD quality at its lowest and that’s already too much for me!

Have you ever used or thought about using Eurorack?

Recently I started looking a bit into it but my eyes glaze over every time I start having to learn what each tiny little bit does. I have a Dreadbox Erebus 3 semi-modular synth and I’ve found that when I paired it with an analog sequencer like a Korg Sq1 I was getting those sort of sounds and modulations. I think semi-modular is really as far up that road I’m willing to go.

When arranging do you have any particular “rules” that you follow?

No rules, I have a generic structure in my head that says try to have an intro, a theme, a break, another theme, and extended middle and an end. But it is just a rough template to help me if I’m stuck but oftentimes I ignore it altogether as I like to sort of monotone tracks, where there’s just one theme and one main movement but things shift in and out, so it’s sort of sculptural almost, where it is very static but also keeps on changing subtly depending on what you’re focusing on. So it depends, I try to listen to the track and see what it wants to do.

Are you a manual reader or do you just dive into gear and experiment?

Manual reader, I like to know how things work and refer back to the manual if needed; learn it once and then forget it if possible. 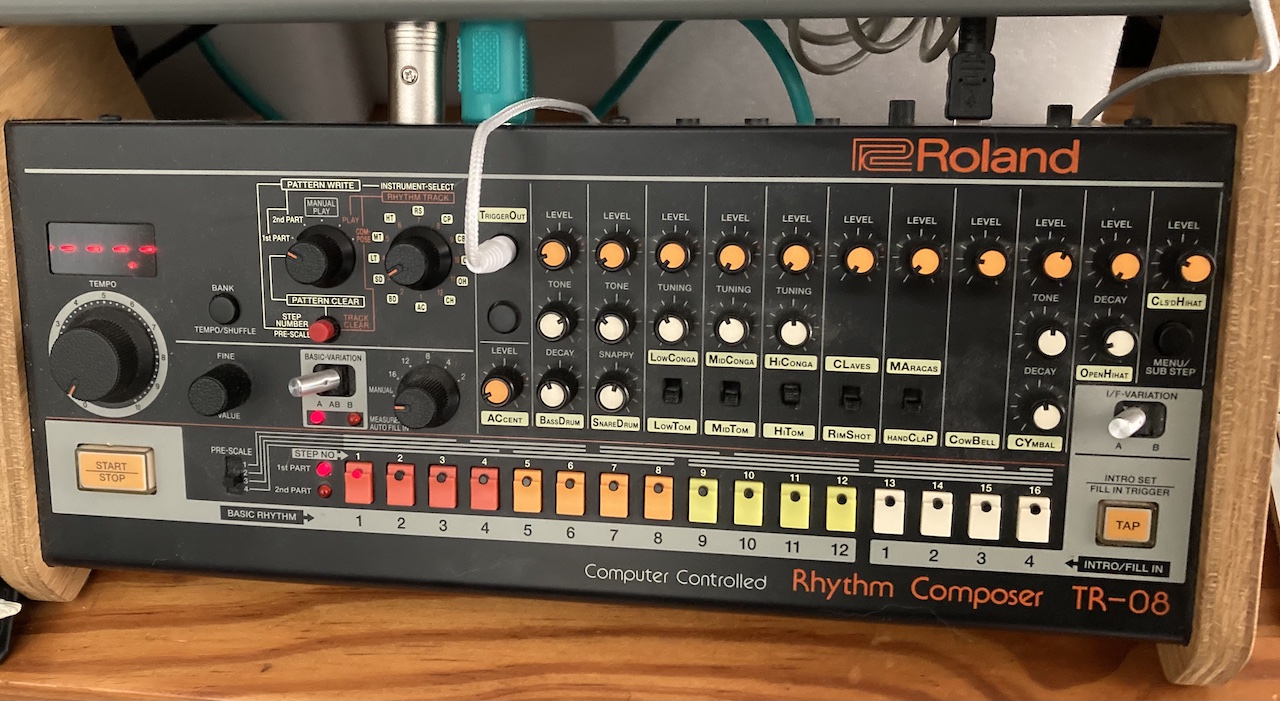 What is your ratio of started ideas to finished tracks?

I’d say 1:1 almost, I have a compulsion to finish everything I start. My analyst can probably explain it better than I can.

What is your ritual to get creative?

I don’t honestly have one, if I’m sat in front of the machines something will always bubble up.

Are there any artists studios that you look up to?

Oh, I don’t know, I’ve always loved how Lee Perry’s Black Ark studio looked before he burned it down. I like messy studios, I don’t like ones that look like you’re in a guitar shop or a hospital operating room.

Can you tell us about the mix you recorded for us? Looks to have a lot of 90’s tunes on it.

Yeah, I had that mix in my head for a while. It is basically an all-vinyl tribute to what was coming out of Mark Broom’s “Pure Plastic” label and studio in the early ’90s alongside work from contemporaries like Stasis (Steve Pickton), Baby Ford, Dave Hill, Ed Handley (of Plaid fame). Most of the tracks in the mix are from those guys or groups made with them in it and came out all roughly around the first half of the ’90s. I’ve always loved this specific kind of techno, something about this particular set of artists at that particular time. I love the focus on very funky drum machine patterns, brooding low baselines, sparse synth lines and pads. It’s pure dance music for dancing and getting locked right in it.

Recently Mark Broom posted a pic on his Instagram with the studio they were using for a lot of these and it is exactly like I imagined it, a desk, an MPC, a Bass station, maybe an 808 and a digital synth. Very functional, very focused with the thrust coming from very tightly programmed patterns and intuition of the artists. It’s hard to put into words, just listen to it, it’s very well put together dance music, unpretentious and yet timeless. Dig in.